Charlotte had a heart mass that was detected before birth Charlotte Wagaman, 2, of Keokuk, Iowa, had to have a 12-hour surgery to remove a mass on her heart when she was just 14 months old. She was in the University of Iowa Children’s Hospital Pediatric Intensive Care Unit for 40 days following surgery, but is now home and loves animals, coloring and playing with her protective older brother, Cameron. Photo courtesy the UI Health Care Marketing and Communication.
By: Catie Malooly  |  2014.11.12  |  07:00 am

Editor's Note. Charlotte Wagaman of Keokuk, Iowa, will be the honorary Kid Captain when the Hawkeyes take on the Fighting Illini Saturday, Nov. 15, at 11 a.m. at Memorial Stadium in Champaign, Illinois.

When Whitney Wagaman had a routine ultrasound with her local doctor at 20 weeks, she was ecstatic to find out she was having a baby girl.

But that excitement turned to fear once Whitney and her husband, Corey, learned something was wrong: Baby Charlotte had a mass on her heart.

Though the mass wasn’t cancerous, removal was necessary; there was a risk the mass could break from her heart, which could cause a heart attack, stroke, or sudden death.When she was a month old, Charlotte began seeing University of Iowa Children’s Hospital cardiologists to determine the best treatment plan.

“I was scared,” says Whitney. “Up until that point, I was always afraid I was going to walk in (her bedroom) and find her not breathing.”

“We had a good team of people reassuring us that she was going to be OK and they were going to take whatever steps necessary to make sure she was always comfortable,” remembers Corey.

Complications arose during surgery when doctors discovered the mass was embedded deeper into Charlotte’s heart valve tissue than originally thought. A five-hour surgery turned into 12 hours, and her heart wouldn’t restart.

“She needed time to rest before they could do anything further,” recalls Whitney. “Otherwise, they didn’t think she would make it.”

Charlotte was taken to the Pediatric Intensive Care Unit (PICU). Her chest was still open and she required full life support, including ECMO, or Extracorporeal Membrane Oxygenation, which acts as the body’s heart and lungs.

Seeing their daughter in such a vulnerable state was difficult for the Wagamans.

“I held her hand and talked to her, and we told her she was going to be OK. Tears came out of her eyes,” says Whitney. “It broke our hearts to know she couldn’t open her eyes or move, but she knew we were there.”

After three weeks in the PICU, Turek and his team decided Charlotte needed another surgery to implant a mechanical valve in her heart to replace the damaged one.

“We knew there were things that could happen with the valve and the medicine she would require for the rest of her life, and we didn’t care,” says Whitney. “We just wanted our baby girl.

“We trusted Dr. Turek more than anything,” she adds. “We knew he was going to do everything he could for her.”

The surgery was a success. Charlotte spent a total of 40 days in the hospital, and has made huge strides since.

“We know she’s always going to have challenges, but I don’t foresee any that she can’t overcome,” says Corey.

“Everything was working against her and she pulled through,” says Whitney. “She surprises us every day, and we couldn’t be more thankful.” 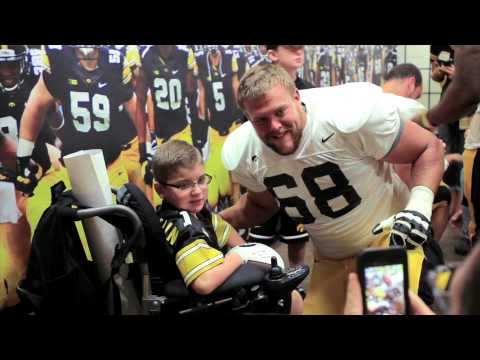