Physicists led by the University of Iowa report definitive evidence of how auroras are created. In experiments, the physicists demonstrated the physical mechanisms for the acceleration of electrons by Alfven waves under conditions corresponding to Earth’s auroral magnetosphere. Photo courtesy of NASA.
By: Richard C. Lewis  |  2021.06.07  |  10:46 am

The aurora borealis, or northern lights, that fill the sky in high-latitude regions have fascinated people for thousands of years. But how they’re created, while theorized, had not been conclusively proven.

In a new study, a team of physicists led by University of Iowa reports definitive evidence that the most brilliant auroras are produced by powerful electromagnetic waves during geomagnetic storms. The phenomena, known as Alfven waves, accelerate electrons toward Earth, causing the particles to produce the familiar atmospheric light show.

The study, published online June 7 in the journal Nature Communications, concludes a decades-long quest to demonstrate experimentally the physical mechanisms for the acceleration of electrons by Alfven waves under conditions corresponding to Earth’s auroral magnetosphere.

“Measurements revealed this small population of electrons undergoes ‘resonant acceleration’ by the Alfven wave’s electric field, similar to a surfer catching a wave and being continually accelerated as the surfer moves along with the wave,” says Greg Howes, associate professor in the Department of Physics and Astronomy at Iowa and study co-author.

Scientists have known that energized particles that emanate from the sun—such as electrons racing at approximately 45 million miles per hour—precipitate along the Earth’s magnetic field lines into the upper atmosphere, where they collide with oxygen and nitrogen molecules, kicking them into an excited state. These excited molecules relax by emitting light, producing the colorful hues of the aurora.

The theory was supported by spacecraft missions that frequently found Alfven waves traveling Earthward above auroras, presumably accelerating electrons along the way. Although space-based measurements had supported the theory, limitations inherent to spacecraft and rocket measurements had prevented a definitive test.

Physicists led by the University of Iowa report definitive evidence of how auroras are created. In experiments, the physicists demonstrated the physical mechanisms for the acceleration of electrons by Alfven waves under conditions corresponding to Earth’s auroral magnetosphere. Illustration by Austin Montelius.

The physicists were able to find confirmatory evidence in a series of experiments conducted at the Large Plasma Device (LPD) in UCLA’s Basic Plasma Science Facility, a national collaborative research facility supported jointly by the U.S. Department of Energy and National Science Foundation.

“The idea that these waves can energize the electrons that create the aurora goes back more than four decades, but this is the first time we’ve been able to confirm definitively that it works,” says Craig Kletzing, professor in the Department of Physics and Astronomy at Iowa and a study co-author. “These experiments let us make the key measurements that show that the space measurements and theory do, indeed, explain a major way in which the aurora are created.”

The phenomenon of electrons “surfing” on the electric field of a wave is a theoretical process known as Landau damping, first proposed by Russian physicist Lev Landau in 1946. Through numerical simulations and mathematical modeling, the researchers demonstrated that the results of their experiment agreed with the predicted signature for Landau damping.

The agreement of experiment, simulation, and modeling provides the first direct evidence that Alfven waves can produce accelerated electrons, causing the aurora, says Troy Carter, professor of physics at UCLA and director of the UCLA Plasma Science and Technology Institute.

“This challenging experiment required a measurement of the very small population of electrons moving down the LPD chamber at nearly the same speed as the Alfven waves, numbering less than one in a thousand of the electrons in the plasma,” Carter says.

James Schroeder, assistant professor of physics at Wheaton College and the study’s corresponding author, earned a doctorate at Iowa. Frederick Skiff, professor in the UI Department of Physics and Astronomy, is a study co-author. Stephen Vincena, a research physicist at UCLA, and Seth Dorfman, with the Space Science Institute and a visiting researcher at UCLA, are contributing authors.

The U.S. National Science Foundation, the U.S. Department of Energy, and NASA funded the research. 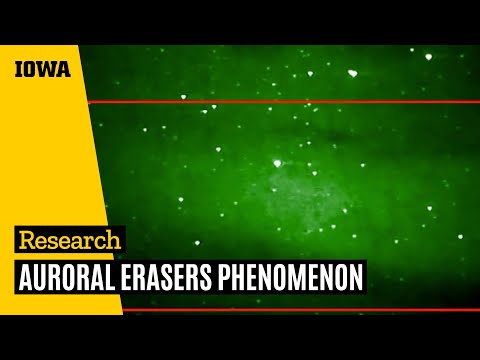