IIHR—Hydroscience and Engineering researcher Casey Harwood peruses data from an amphibious Gibbs Quadski (seen in the distance) at the Coralville Reservoir to better understand how the machine will perform in coastal waves—a notoriously difficult zone of operation. Photo by Tim Schoon.
By: Tricia Brown  |  2019.03.06  |  08:06 am

When Casey Harwood accepted a position as assistant professor of mechanical engineering at the University of Iowa, he did so knowing that he would be conducting research at one of the premier institutions in his chosen specialty: hydrodynamics.

The UI’s renown also helped him land his current research project, one that’s so specific that only a few locations in the country are uniquely positioned to support it.

Harwood, who also is a researcher at the UI’s IIHR—Hydroscience & Engineering, is studying an amphibious vehicle, a Gibbs Quadski, to better understand how the machine will perform in coastal waves. Such vehicles, which can maneuver in water and on land, have many potential uses, from search and rescue to first-responder transport, surveying, and scientific applications.

However, a major obstacle that amphibious-vehicle builders face is that the machines are largely unproven in the chaotic surf zones that develop near beaches.

“We need agile vehicles that are capable of transitioning between land and sea to do their jobs, whether the job is to rescue a stranded surfer or to conduct surveys of the seafloor,” Harwood says. “That means crossing the surf zone, and doing it safely. But we need better science to tell us what’s actually happening in this critical region near the beach.”

Last fall, Harwood conducted experiments with the vehicle at the Coralville Reservoir and the Ohmsett National Oil Spill Response Test Facility in New Jersey, where he and his team focused on the behavior of small vessels in conditions ranging from calm water to ocean-like swells. The Quadski was outfitted with custom sensors and operated remotely.

“We were lucky to test at Ohmsett,” says Harwood. “It’s a big laboratory. We could dial in the wave conditions we wanted while the Quadski recorded all of the important data.” Graduate assistant Andrew Arnold pilots the Gibbs Quadski, paced by Casey Harwood and  Tony Loeser (at the helm of the Iowa-flagged vessel). Photo by Tim Schoon.

That ability to control the test conditions is invaluable, but it’s also the biggest challenge as Harwood’s team shifts its focus to the surf zone, which is difficult to study in the field because nature dictates the conditions and the waves the test vehicle battles are difficult to measure and reproduce.

The solution? Take the experiments into the lab. The next step will be to build a small-scale model of the vehicle and continue testing it this summer at the UI’s Wave Basin, located on the Oakdale campus. Harwood’s experiments will provide data for high-resolution computational modeling of the surf zone hydrodynamics being conducted by IIHR Research Engineer Pablo Carrica (also a UI professor of mechanical engineering). Hiroyuki Sugiyama, UI associate professor of mechanical engineering, is working on simulating the vehicle when it’s operating on land.

“We have experimental and computational hydrodynamics under one roof, with the resources to make both of those programs successful. It’s hard to find the right combination of expertise anywhere else in the country.”

The second part of Harwood’s research focuses on the physics of the waves. His objective is to create a first-of-its-kind data set describing waves that go from deep water onto a beach and break. The measurements will help researchers understand the physics involved and act as a benchmark for validating simulations. The simulations, in turn, may open the door to more complicated research.

“The science community in general has a pretty good idea of what happens when a wave hits the beach, but it’s really hard to simulate,” Harwood says. “You can describe it in general terms, but we lack specific data to point to.”

Harwood came to the UI in January 2017 after completing a PhD at the University of Michigan. He says he is happy to have found a position at the UI in his chosen field—experimental naval hydrodynamics—but he doesn’t deny the irony of coming to landlocked Iowa to conduct his research.

“This project is one of an ‘ecosystem’ of related research,” Harwood says. “My colleagues perform the simulations, while my lab performs the experiments—it’s very collaborative. We have experimental and computational hydrodynamics under one roof, with the resources to make both of those programs successful. It’s hard to find the right combination of expertise anywhere else in the country.” Harwood and Arnold make adjustments to the Quadski. Photo by Tim Schoon.

Harwood says the UI’s world renown in has been a boon to his career and the work he does.

“There’s an endorsement that comes from being from an institute like IIHR that helps you get in the door,” he says. “That helps build new relationships. It’s also helped because we have really great resources available and IIHR is really supportive, which has opened new areas of research that I wouldn’t have been able to do otherwise.”

In fact, Harwood’s amphibious vehicle work is a departure from the path he was on in graduate school at Michigan, where he studied hydrofoils like those used in the Americas Cup races.

“This is a new topic of research, and that’s really exciting,” he says. “If I had gone anywhere else, this research would have been out of reach. I wouldn’t have had access to the capabilities and facilities. I would have had to build things from scratch that Iowa already has in place.” 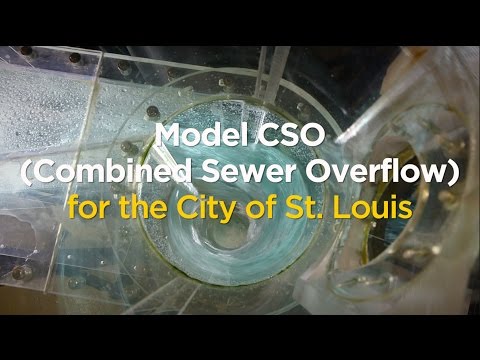