Long before Iowa was the agricultural powerhouse it is today, a small group of Native Americans was already intensively farming in the state’s southwest corner.

The Glenwood culture arose about A.D. 1200 in Mills County. These early Iowans lived as neighbors, yet kept to themselves, farming individual plots. They lived in humble earthen homes, hunted deer, and fished in the Missouri River. And they eked out a mostly peaceful existence until largely—and mysteriously—vacating the region about 150 years later. Artificats from the Glenwood site include a scapula hoe, an awl, fish hooks, and a fish hook blank. Photo courtesy of the Office of the State Archaeologist.

Although farming arose in Iowa as many as 4,000 years ago, the Glenwood people could be viewed as among the first family farmers in the state. Extended families deliberately set aside tracts of land to cultivate, growing native crops such as squash and sunflowers, but also diversifying into new foods such as beans.

“These were hunting communities that got various forms of reptiles, mammals, and fish,” says Stephen Lensink, associate director for the Office of the State Archaeologist at the University of Iowa, who is leading a state-funded analysis of the Glenwood culture. “They probably grew beans because they liked beans, and because if you diversify your agricultural base, you build some stability (in the community).”

These prehistoric Native Americans numbered only as many as 200 in Iowa, although there also were related groups in Nebraska, Missouri, and Kansas. To date, 281 Glenwood sites have been recorded in Iowa, nearly all of them in Mills County. Current research, funded through the Iowa Department of Transportation, with matching money from the Office of the State Archaeologist, has focused on the homes of the Glenwood culture.

The Glenwood people lived in earth lodges. The structures, built into the undulating hills of the region or above ground, housed extended families, with as many as 16 people occupying some 900 square feet of space. Little is known about what took place inside the lodge, although each family appeared to store the harvest in pits within the home, away from the prying eyes of others.

“These are kind of rural folks who are not interacting extensively over a wide area and were somewhat secretive about their own household economy,” says Lensink, also an adjunct assistant professor in the Anthropology department at the UI.

A small-scale model of an earth lodge and Glenwood culture artifacts can be seen at the Mills County Historical Museum.

It appears the Glenwood people, while reserved, lived a peaceful life. No fortifications have been found, and there is little to no evidence of inter-family combat. Yet just a century and a half after they settled in southwest Iowa, evidence of the Glenwood culture ceases.

Lensink and other archaeologists think the Glenwood people moved frequently—building new earth lodges at each stop—as they pursued game and searched for timber to build, heat homes, and cook food. About A.D. 1350, the Glenwood culture disappeared from western Iowa, perhaps in response to another culture, the Oneota, pushing in from the east. There’s also evidence of an end to a prolonged drought in the Central Plains about A.D. 1300 that may have spurred the Glenwood people to relocate westward.

“It appears these people were on the verge of starving,” Lensink says, based on analyses. “They were eating fish as small as minnows, crawdads, birds’ eggs—anything they could get their hands on.” 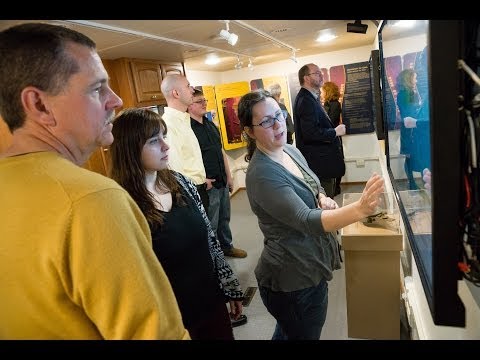