Constructed in 1894, Old Dental lived north of Old Capitol on the Pentacrest until 1975. Its demolition completed a turn-of-the-century plan for a central campus with a neoclassical theme. Image courtesy of the Frederick W. Kent Collection of Photographs, University Archives, Department of Special Collections, University of Iowa Libraries.
By: David McCartney  |  2016.02.15  |  12:02 pm

It might come as no surprise that a building called Old Dental would be the Pentacrest’s last—ahem—extraction. When the 1894 structure was torn down in 1975, it represented the final step toward completion of the university’s central campus as initially envisioned by President George MacLean at the turn of the 20th century. Old Dental was the second home of the College of Dentistry, designed to accommodate a program that was attracting a rapidly growing enrollment in the late 19th century. It was situated immediately north of Old Capitol at the corner of Capitol and Jefferson, a three-story brick and wooden structure that had already reached capacity when its doors opened for classes in 1895.

By that time, a half-dozen buildings representing a mishmash of design had appeared around Old Capitol, buildings that didn’t conform to the neoclassical theme proposed by MacLean and endorsed in a report prepared by the renowned Olmsted brothers a few years later (see “The Report of the Olmsted Brothers Outlining Plans for the Future Arrangement of the Grounds and Buildings of the State University of Iowa,” Iowa City: State University of Iowa, 1905, available at the University Archives).

Over time, these undesirable structures were lost to fire (South Hall, Medical Building), moved to another campus location (Science Building, now Calvin Hall), or demolished (Old Dental and others). The Dentistry Building, as it was initially known, served the college for 23 years, until 1917, when the college moved one block north to the corner of Capitol and Market streets. That building, today known as Trowbridge Hall, was succeeded by the present-day site of the college on the west side of the Iowa River in 1973. For decades, though, stalwart Old Dental remained ensconced. It was put to a variety of non-dental uses over time. In 1927, for example, the university’s printing plant was installed on the second floor, and the Department of Buildings and Grounds moved into the building that same year. Academic programs, including psychology and art, were based there at one time or another, as were such administrative offices as financial aid.

By 1975, time had caught up with the aging structure, which by then was rife with safety hazards. The decision to remove Old Dental, informally made by university administrators some 50 years earlier, was at last final. Demolition was completed in October 1975, and the Pentacrest could—at last—live up to its name as a setting for five architecturally harmonizing edifices. A perfect set of teeth, as it were. 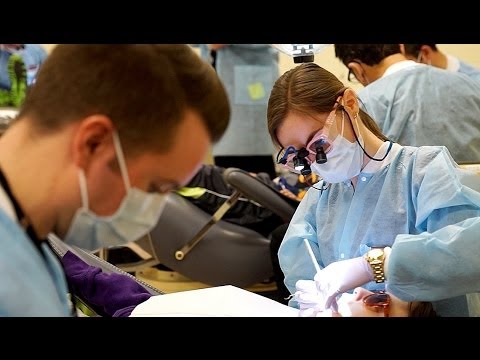