The University of Iowa Alumni Association (UIAA) has announced the 2016 recipients of the Distinguished Alumni Awards (DAA), the association’s highest honor.

“The 2016 awardees are exemplary representatives of the University of Iowa,” says Jeff Kueter, UIAA president and CEO. “They are accomplished professionals, community leaders, philanthropists, and mentors to students and young professionals.”

Since 1963, the UIAA has presented Distinguished Alumni Awards every year to accomplished alumni and friends. This year, 12 awardees were honored in five categories: service, achievement, young alumni, faculty/staff, and friend of the university.

Three people received Distinguished Alumni Achievement Awards to recognize their significant accomplishments in business or professional life or for distinguished human service to their community, state, or nation.

Two individuals received the Distinguished Faculty/Staff Award for significant achievement or specific meritorious service on behalf of the quality and advancement of the university.

One person received the Distinguished Alumni Friend of the University Award, which recognizes specific and meritorious service on behalf of the quality and advancement of the university and/or the alumni association.

The alumni association helps alumni build relationships with the UI and each other by offering a sense of community and belonging based on shared beliefs, values, experiences, and Hawkeye spirit. Through a variety of communications, events, and services, the association helps alumni express and reinforce their loyalty, gratitude, and pride—adding value to their own lives and communities while also enhancing the national reputation and ensuring the continued success of the University of Iowa.

Learn more about the Distinguished Alumni Awards and a database of past awardees.

The UIAA welcomes award nominations from friends and alumni of the UI.  If you know an exceptional alumnus/a, friend, or faculty/staff person who warrants recognition, please consider nominating them for the 2017 awards. Additional information on the nomination process is available at www.iowalum.com/daa/nominations.cfm. 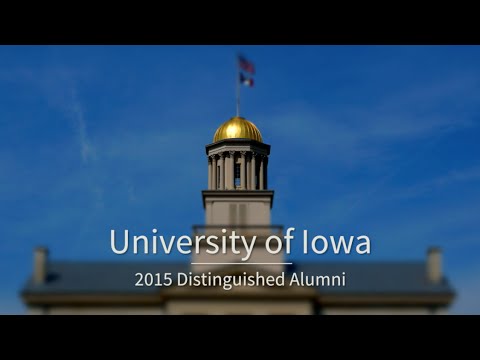