University of Iowa alumnus Jordan Loperena has always had a passion for sports. But after he sustained a concussion while playing for the University of Iowa Hockey Club team his freshman year, Loperena sought a different way to stay connected.

He first joined KRUI, a student-run radio station broadcasting out of the Iowa Memorial Union. Loperena quickly worked his way up to sports director and helped expand the sports programming and staff. Under his leadership, the staff grew from 15 to 50.

“It was one of the best experiences of my life and helped me get where I needed to be,” says Loperena, who graduated from Iowa in 2010.

KRUI wasn’t the only hands-on experience the Lake Zurich, Illinois, native found while pursuing a double major in communication studies and sports studies. His first exposure to television broadcasting was an internship with the Big Ten Network. While working with BTN Student U , Loperena helped produce live UI athletics events to air live streaming on the internet and  to replay on Big Ten Network’s broadcast channel. He worked as an announcer calling play-by-play for the broadcasts, but also gained experience as a technical director and camera operator. After graduating in 2010, Loperena was hired as a production assistant trainee at ESPN.

“I had seven months to prove myself—I would either be hired or let go,” says Loperena.

His work ethic paid off, and he was promoted to content associate with a new role working with the popular College Gameday and College Football Live shows. Some of his tasks included pitching story ideas, booking guests, and producing show segments.

In addition to these tasks, Loperena also assisted in managing the social media channels for ESPN’s flagship show SportsCenter.  With over 14 million Twitter followers, Loperena says, “It’s a fun job, but it can also be very high pressure.” Recently Loperena’s role has shifted again, and he is working in the talent production office. As a talent producer, he often books guests and prepares them for interview segments across multiple shows on the ESPN family of networks.

“A highlight since working as a talent producer is that I got to take Coach Ferentz around for the day during his trip to ESPN headquarters in Bristol, ( Connecticut),” Loperena says. 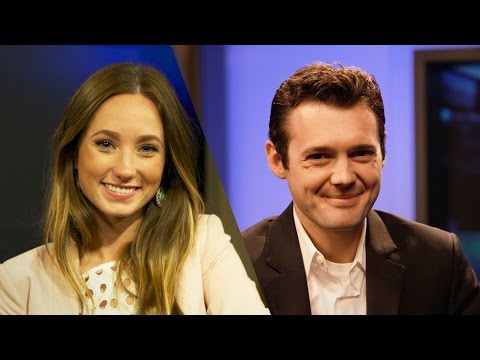