Would you trust a warning sent by a car? Researchers are using the UI’s Hank Virtual Environments Lab to learn differences between texting and non-texting pedestrians who receive warnings on cell phones. Photo by Joe Kearney
By: Gary Galluzzo  |  2015.04.29  |  11:45 am

Anna, a University of Iowa junior, is walking along a sidewalk and toward an intersection while texting on a cell phone when — suddenly — she sees a number “8” surrounded by a bright red square appear on her screen.

As she walks, the number on her cell phone changes to a “7” and then a “6.”  It’s a warning that six seconds remain until she can safely begin crossing the street.

Will Anna use the warning?

University of Iowa researchers want to know the answer to this question and others in order to make the nation’s roads safer. That’s why Anna (not her real name) is participating in a study by crossing a virtual street at the UI’s Hank Virtual Environments Lab. Located in MacLean Hall on the UI campus, the Hank Lab allows pedestrians to encounter realistic traffic situations in a safe, computer-simulated environment.

At the moment, finding the answer to the question involving students texting on cell phones and traffic may be the key to future road safety, according to study co-principal investigators and lab co-directors Jodie Plumert, professor of psychology, and Joe Kearney, professor of computer science.

The research goal is to determine response differences between texting and non-texting pedestrians, both of whom receive warnings on their cell phones. Later, they hope to explore pedestrian response to “connected vehicle technology” in which a similar warning is sent by a computer inside an approaching car.

“People texting on cell phones walk slower and pay less attention to their surroundings,” says Plumert. “In the near future, cars will sense the presence of other cars and trucks, as well as bikes and pedestrians. This research looks at having a warning sent to cell phones so we can ask, ‘Would people trust it?’ and ‘Would it work technologically?’”

Kearney says it is tricky to design a cell-phone warning system.

“People are always on the edge of disaster. For example, people routinely stand on the corner waiting for the light to change while just several feet away, cars whiz past,” he says. “If a warning is sent every time a car passes by, people will soon ignore them. In addition, you don’t want pedestrians to get a warning at a critical moment and be distracted from looking at the traffic.”

So far, the Hank Lab study has included college students. Plumert notes that previous researchers have found that younger people tend to get a late start when crossing streets, often waiting until the gap between cars closes to an unsafe distance.

“The simulator allows us to test real-life problems in safety because we can control all aspects of the test,” says Plumert. “In particular, we can control the volume of traffic and the gaps between cars.”

Back in the Hank Lab, Anna stops and waits for the countdown to reach “0,” Then she sees the red square change to green, and she safely crosses the street. Later, she smiles and steps out of the lab and into the hallway, where other college students walk past on their way to class.

“The goal of the SAFER-SIM University Transportation Center is to use simulation techniques to address the safety issues prioritized by the U.S. DOT,” says UI SAFER-SIM Director Dawn Marshall.  “We feel it is important to include all road users; drivers, pedestrians, and bicyclists in our efforts to improve safety. The pedestrian and bicycle simulators at the Hank Virtual Environments Lab complete the picture because often road safety is only approached from the driver’s perspective.”

The U.S. Department of Transportation (DOT) Research and Innovative Technology Administration in 2013 selected five universities to share a $1.4 million grant to conduct research on safety issues prioritized by the DOT. 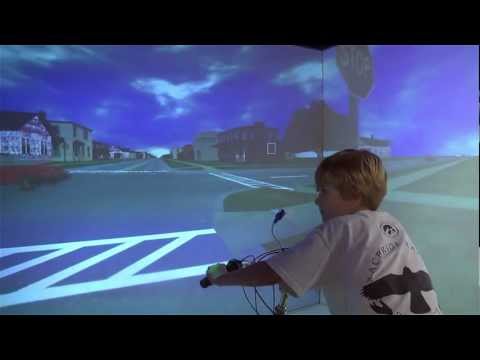