UI documentary looks at storied history of Pollock's 'Mural'
This is an abridged preview of what will become "Mural: The Story of a Modern Masterpiece," a 30-minute documentary film about Jackson Pollock's famous painting and its story here at the University of Iowa. Documentary filmmaker Kevin Kelley is leading the project.

Jackson Pollock’s Mural, considered by many to be the most important modern American painting ever made, is trying out a new medium: motion pictures.

Mural: The Story of a Modern Masterpiece, is a film project helmed by Kevin Kelley, a documentary filmmaker who works in the University of Iowa Office of Strategic Communication. The film is coming together as Mural writes another chapter in its storied history: in April, the artwork will make a transatlantic journey, stopping in numerous cities before making its way to the completed University of Iowa Museum of Art.

“I just want to tell the most compelling story with the highest quality possible,” Kelley says. “I would like as many people to see this film when finished as possible, for many, many years to come. It is an important University of Iowa story that people should know about and I feel honored that the university is allowing me to work on this project.”

Farewell to an American Treasure

What: The UI Alumni Association will host an event, “Farewell to an American Treasure: An Evening with Jackson Pollock’s Mural“

Sean O’Harrow, director of the UI Museum of Art, will provide a lecture and guided tour.

Register for the free public event by March 13.

A seven-minute preview cut was shown Jan. 31 at the Sioux City Art Center, and will be shown there again March 21 as part of a University of Iowa Alumni Association event (see sidebar).

A full 30-minute version of the film is slated for completion this spring, with Iowa Public Television and other venues in mind. The film looks at numerous notable moments preceding the painting’s creation and during its life span since:

The commission of Mural by Peggy Guggenheim. Guggenheim, the leading dealer of Modern art in New York during the 1940s, was eager to present in her home a symbol of support for the new American brand of art she was beginning to champion in her gallery. She commissioned Pollock to create a mural for her new townhouse. Pollock was to choose the subject, and the art’s size would be immense (8’ 1 1/4” x 19’ 10”), meant to cover an entire wall. At the suggestion of Guggenheim’s friend and advisor Marcel Duchamp, it was painted on canvas, not the wall itself, so it would be portable.

Guggenheim’s gift of Mural to the UI. When Guggenheim decided to move back to Europe in 1947, she wanted to give the painting to an institution that she felt shared her approach to art and artists. Guggenheim, recognizing the significance of the UI studio art program, wrote to Lester Longman, head of the UI School of Art and Art History, on Oct. 3, 1948, reminding him that she had offered to give Mural to the university if he would pay to have it shipped from Yale.

He responded immediately that indeed he was most interested, and began negotiating with the administration for the cost of freight. Finally, in October 1951, the painting was shipped to Iowa.

The painting’s homes at the UI. Mural was placed in the UI Mural Studio, created by Grant Wood when he created murals for the Works Progress Administration. “It represented in many ways everything that Grant Wood was not, and for Lester Longman symbolized the new dawn of abstract expressionist art, both in the art program and in America,” says Sean O’Harrow, director of the UI Museum of Art.

For a time it hung in Main Library before taking up residence for nearly four decades in the UI Museum of Art.

Displacement due to flooding. In the summer of 2008, the UI campus experienced its greatest natural disaster in its history: a historic flood of the Iowa River that damaged or destroyed the entire arts campus. The university was able to save Mural—in fact, 99 percent of the value of the UI Museum of Art collection was rescued.

Mural left Iowa for Chicago, eventually returning to the state in 2009 to be displayed at the Figge Art Museum in Davenport (at the time, O’Harrow was director of the Figge).

Conservation at the Getty Institute. In 2009, UI officials invited experts from the Getty Conservation Institute and J. Paul Getty Museum to Iowa to assess the condition of the painting. In 2012, Mural went through a two-year technical study and conservation treatment by research scientists in Los Angeles.

The conservation treatment removed a synthetic varnish that had been applied during a treatment in 1973 and addressed the effect that a wax-resin lining had on the current appearance of the painting.

Over 300,000 people visited the painting during its exhibition at the Getty between March and June of 2014, making it one of the most popular shows ever for that institution.

Its return to the state of Iowa. The Sioux City Art Center held a public opening of the Mural exhibition on July 21, 2014, and will host the painting until April. Mural headlined the center’s 100th anniversary activities, and center director Al Harris-Fernandez anticipated many people from northwest Iowa and the three nearby bordering states would view this influential exhibit.

“I think this is going to be a banner year for the Sioux City Arts Center,” Harris-Fernandez remarked this past summer.

Kelley’s appreciation for Pollock’s work is rooted in his time as an art student, when he tried his hand at Pollock’s “action painting” style. The filmmaking process—which took Kelley and his colleagues to places such as Los Angeles and provided the opportunity to talk with authors, historians, curators, and conservators—has deepened that love.

“I already came to the film with a fledgling appreciation of Pollock’s process and work, but I did not know a lot of the history behind Mural and why it was in Iowa,” Kelley says. “The whole research and interview process has really deepened my appreciation of this project as well.

“So after six years when I finally got to see the painting again back at the museum in Sioux City, Iowa, I realized that Mural really does belong to Iowa.” 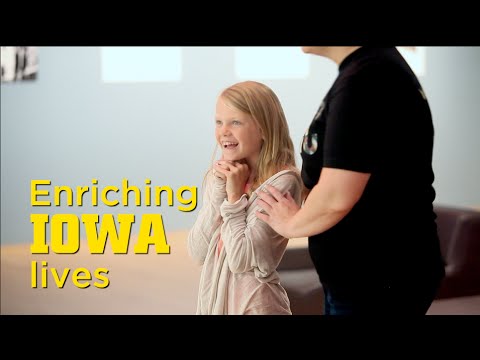