As part of a statewide initiative, the University of Iowa is offering free test kits to Iowans so they can measure the levels of lead in their home’s drinking water. Photo by Mukesh Sharma/Unsplash.
By: Tom Snee  |  2019.09.27  |  09:52 am

Editor’s note: The Get the Lead Out of Iowa Drinking Water campaign concluded with National Lead Poisoning Prevention Week, which ended Oct. 26. Through the campaign, the University of Iowa distributed more than 350 lead testing kits, and are in the process of analyzing the samples. Results will be sent out to participating homeowners in the next three to four weeks. The researchers aim to run a similar campaign during next year’s Prevention Week.

Local residents who would like to have their water tested for lead can contact the State Hygienic Laboratory or other Iowa DNR-certified testing laboratories identified at the end of this document: www.iowadnr.gov/Portals/idnr/uploads/water/wso/files/Drinking_Water_Lead_Testing_in_Schools.pdf.

The University of Iowa is helping state residents to Get the Lead Out of drinking water.

The statewide initiative is offering free test kits to Iowans outside of Johnson County so they can measure the levels of lead in their home’s drinking water. The Get the Lead Out project will run through National Lead Poisoning Prevention Week, which takes place Oct. 20–26. The project is part of a larger initiative to compile a database of lead levels in drinking water in homes and schools throughout the state.

Eligible residents can request a home testing kit by sending an email to get-the-lead-out@uiowa.edu. The process is simple—the kits contain three bottles and instructions on how to fill each with tap water and return them to the university for lab testing. Homeowners will receive the results of the test, a sheet that explains the results in plain language, and information about what they can do if the test reveals potentially unsafe levels of lead in their water.

The initiative is led by the Department of Civil and Environmental Engineering in Iowa’s College of Engineering; IIHR—Hydroscience and Engineering; and the Center for Health Effects and Environmental Contamination. Michelle Scherer, Donald E. Bently Professor of Engineering, says the goal of the initiative is to see if Iowans are being exposed to high lead levels through their drinking water, and if they are, offer strategies for the homeowner to reduce their exposure.

Get your testing kit!
Request a kit via email: get-the-lead-out@uiowa.edu

How do I perform the test?
It’s pretty simple: The kits contain three bottles and instructions on how to fill each with tap water and return them to the university for lab testing.

“A solution is not always going to be expensive or difficult,” she says. “Sometimes, it might be as easy as adding a filter to the tap or flushing the faucet for a minute or two before drinking the water.”

The team wants to determine if lead from drinking water is a significant exposure route in Iowa, and if so, provide outreach and education on how to reduce exposure to the toxic heavy metal. Young children are particularly sensitive to lead, and the U.S. Environmental Protection Agency has stated that there is no safe level of lead for children.

“Even small increases will impact a child’s IQ,” says Hollingshead.

Lead was once found in dozens of everyday products, such as gasoline, house paint, ceramics, canned food, and water pipes. As the dangers of lead exposure became more known, federal regulations required its removal from most products starting in the 1970s, sharply reducing daily exposure. But people can still be exposed to lead left over from past use.

One source of lead is water pipes that are themselves made of lead, or household plumbing that uses solder that contains lead. Even older galvanized pipes can contain lead in their coating. If the pipe or the solder corrodes, lead can get into the water. Drinking water has been estimated to be a significant source of blood lead levels in humans.

“A solution is not always going to be expensive or difficult. Sometimes, it might be as easy as adding a filter to the tap or flushing the faucet for a minute or two before drinking the water.”
—Michelle Scherer, University of Iowa College of Engineering

Excess levels of lead in the water supply have generated headlines in Flint, Michigan, and Newark, New Jersey. Grant says the issue became personal for her when multiple cities in her home state of New Jersey began finding lead in their water systems and schools.

But Scherer says the problem in Flint with excessive lead levels was caused by a change in water sources and inadequate corrosion control. She says most water systems in Iowa are doing a good job at controlling corrosion, but since there are lead sources in home plumbing, more homes need to be measured at the tap.

In addition to voluntary statewide water testing, Grant will work with local communities to test lead in small drinking water systems. She has tested water in homes in Johnson, Iowa, Van Buren, Cerro Gordo, Story, Dallas, and Kossuth counties, and will test water supplies at several public schools in Keokuk and Dubuque. 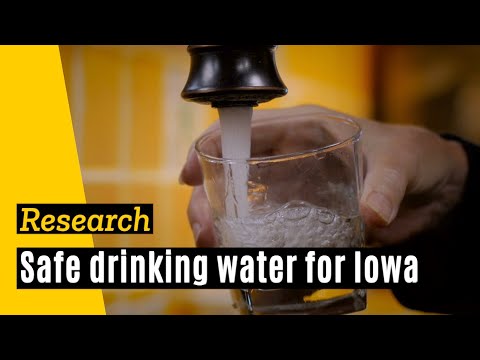